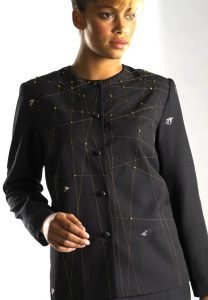 My good friend, the Amazing Tim, owner of the successful web design and development business Hyper Arts, the very same guy who set up my blog for me, took one look at one of my jacket designs and said, “It looks like Indra’s Net!”

I had embroidered straight lines and at every intersection sewn a bead.

Indra’s Net is a Buddhist concept, a metaphor for the belief that everything in our universe is connected.

Timothy Brook explains in his book Vermeer’s Hat, “When Indra fashioned the world, he made it as a web, and at every knot in the web is tied a pearl. Everything that exists, or has ever existed, every idea that can be thought about, is a pearl in Indra’s net. Not only is every pearl tied to every other pearl by virtue of the web on which they hang, but on the surface of every pearl is reflected every other jewel on the net. Everything that exists in Indra’s web implies all else that exists.” 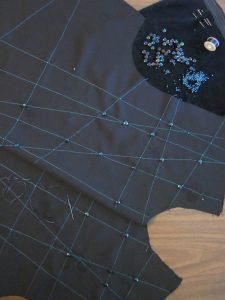 I love the concept and though I can’t pretend that it was my original inspiration, it’s the title I use for this design.

I’m working on a new Indra’s Net, this one in blues, for the ACE show in Evanston.