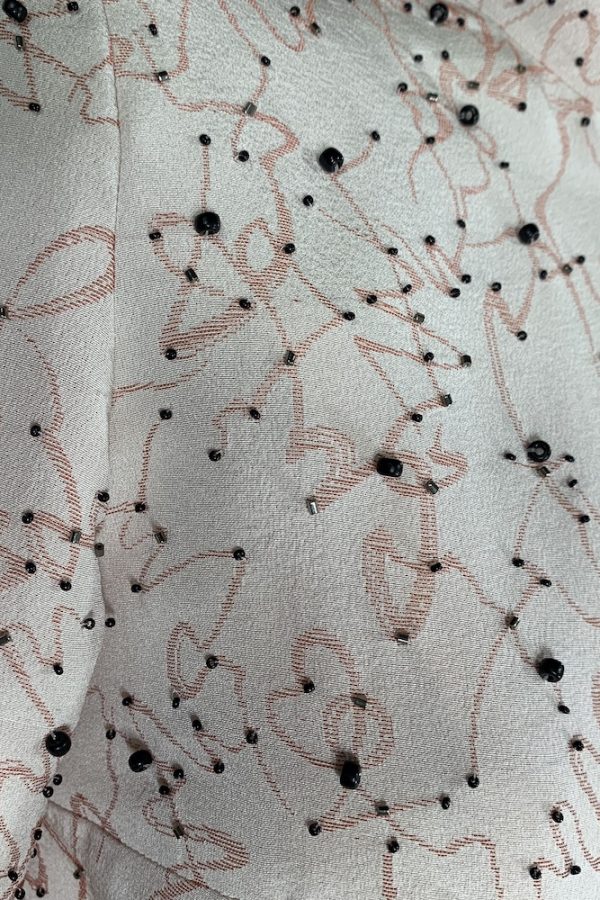 A last look at a few of the pieces I brought to the Smithsonian and the American Craft Made shows.

Like this jacket, a shorter version of the coat we used for the ‘Pink’ video. This fabric came from a very long sleeved, formal kimono. Those traditional kimonos are like western ball gowns. They’re perfect for a special occasion, but maybe not so good for daily life. Fantastic when you want to wear a dramatic and beautiful piece of clothing.

My good fortune, when it’s time to retire it as a wearable kimono, the long sleeves make for a lot more fabric. Plenty for a long coat and a jacket.

Enough for a coat, a jacket and some leftover scraps for a few scarves. ‘Mottainai,’ waste nothing!

Can you see, in the picture below, the pieces of the same fabric? The grey leaf like shapes? And part of a green flower towards the center top. At the bottom, a sliver of dark mahogany petals.

The last bits of this gorgeous fabric, this scarf, ‘Blush Ume,’ is still available, check it out here.

Appliquéd small squares, laid out as though they were tumbling through the water.

The squares were cut from the same kimono silk I used for the facing and the under the collar. A gorgeous deep, deep teal/green silk scattered with little odd shapes and dots.

I used black beads to toughen it up and give it a bit of attitude.

Onward! I’ll finish up some special orders, then start the process all over again.

This is what I do; make stuff, show it, send it off. It’s a pretty good life! 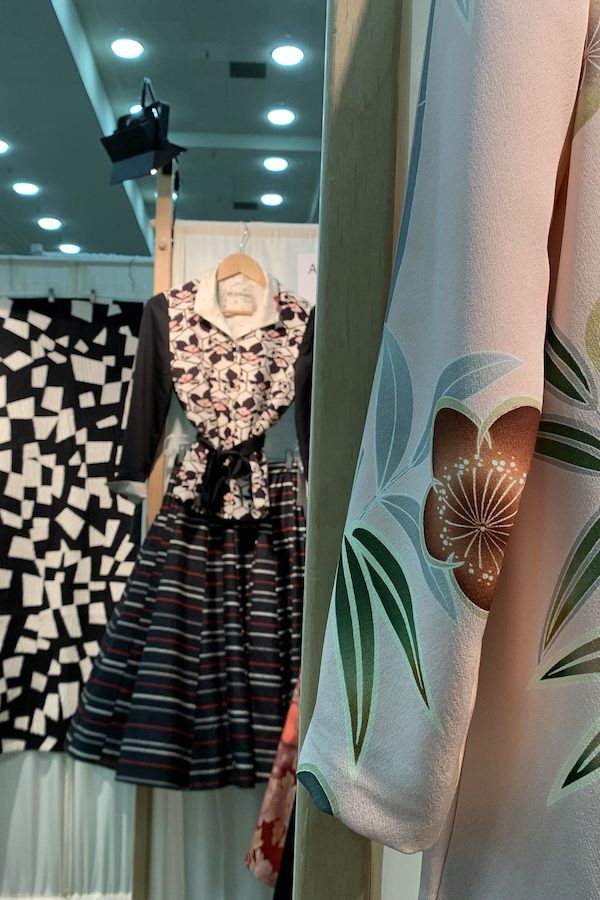 What a thing to be back in Baltimore! Just like old times. Well, except it was May. And instead of the possibility of snow, the days were hot, 90 degrees! Instead of people bundled in warm coats and boots, they were wearing wore shorts and sandals.

Except for the weather, it all felt the same. There we were in the good old Baltimore Convention center, as though hardly any time at all had passed. It was so good to be back!

The floor plan had shifted a bit and I was in a slightly different spot. I was pretty happy about my new place. Not bad at all!

We set everything up, adjusting, rearranging and tweaking, until it was ready.

Then, on day one, the doors were open and in came the people. So many of my old friends, it was great to see them again! And plenty of new faces too.

At the very same time, there was an on-line component for the show. I had to pay attention so if a piece sold in one place, I had to remove to from the other. It was a bit of a mind stretch.

In the end, between the in-person and the online shows, coats, jackets, scarves and skirts found their way to new homes.

After the show we packed and were ready to head back home. Our plane didn’t leave until Monday afternoon so there was time to wander through Federal Hill, check out a few of the little shops and have some lunch.

Built in the 1880’s, it’s a charming part of Baltimore. Rows of small, brick townhouses.

A tiny bit of nature next to a church, St Francis on duty.

Then off to the airport and back home by midnight.

Two big shows three weeks apart. Whew! I came home running on adrenaline. I felt as though I could go and go and go. My energy was off the charts.

Then it hit me. Hey,… it turned out I was exhausted.

A week of full on energy followed by a week of regenerating. Long sleeps and staring out the window. Finally, I am back to normal.

All my thanks to the American Craft Council, who even though they had to cancel the February show, worked hard and made sure the May show went on! 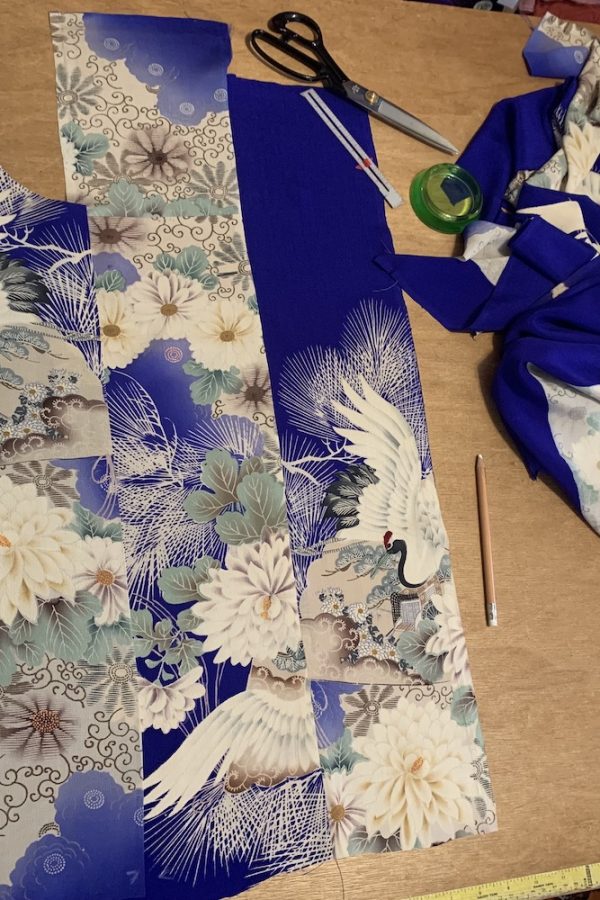 Next up, the American Craft Council’s annual show in Baltimore. It was postponed from the original February dates and rescheduled for May 20-22. It’s coming up in just a few days! I’ve been running up the down escalator to be ready in time.

It’s pretty much the same show it’s always been but with a brand new name, American Craft Made/ Baltimore. They’ve added in an online component so if you can’t make it to the show, you’ll still be able to see the work of many of the artists exhibiting. The online show runs for two weeks. It will start Monday, May 16 and will be up through the 29th.

My inventory was down a bit after the Smithsonian show and I needed new work to bring to Baltimore, like these ‘hitoes,’ finished and ready to go.

A new jacket, almost finished, sewn from a very cool old kimono. There are only buttons and the last bits of lining to sew in place.

And lastly, a new jacket, still in the process of being cut out. It’s from an amazing, vintage kimono. Just a few days to sew it up, but if I focus, it will be finished, packed and on it’s way with me to Baltimore.

Two shows in less than a month, not my normal, not even before covid. But I am game and ready to go!

I am so looking forward to the Baltimore show! This was my last show before lockdown. It’s been 2 plus years and I am ready to be back.